The Wind Fish’s egg, together with the title pronounced like a moron.

The miniboss Hinox (who is not Abobo from Double Dragon) is confused by his own bombs.

The boss of Bottle Grotto, the second dungeon. He’ll kill you in your nightmares!

The flowers surrounding Bottle Grotto. Turns out they are called Goponga Flowers, not Bow Wow Edibles. 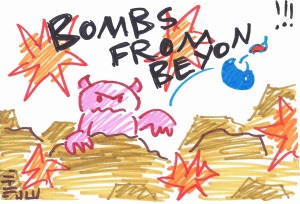 Inspired by an enemy. You won’t be getting his Golden Leaf! I have no idea what happened to the “D”.

The alligators and hippos from the “Dance of the Hours” segment from Disney’s Fantasia spend their off hours doing art in the Animal Village. It makes sense, people.

You’ll take a picture, whether you want to or not! The mouse photographer becomes a bully.

Chuchus, from the Legend of Zelda series. We thought they were in Link’s Awakening, but turns out we were either thinking of Zols (red or green blobs that jump out of the ground and sometimes split into smaller ones) or Buzz Blobs (walking suggestive-looking blob creatures who zap you with electricity if you try to slice them).

Hey, it’s the first dungeon opening from the original Legend of Zelda! Was it also in Link’s Awakening? The debate rages on! 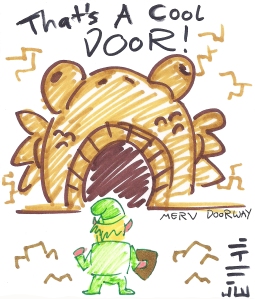 Why if it isn’t our old friend Merv Doorway, the coolest dungeon door there is! Based on the entrance to Angler’s Tunnel.

Based on a statue found in a dungeon. Google says they’re called Eye Guards! Or Eyegores! Who knows?

The frog Mamu sings the worst song ever made. 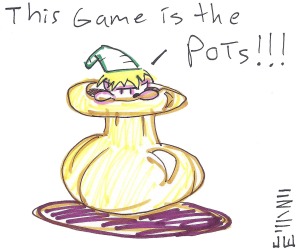 Pots: a Zelda staple! No Buzz Blobs though.

The L-2 Bracelet lets you lift giant statues, but it doesn’t make them any lighter.

Gohma, the boss. Giant eyes are kinda the Doodler’s thing, I guess…

The mural in the Southern Face Shrine that tells you the Secret of Koholint Island. It’s quite clear, isn’t it? 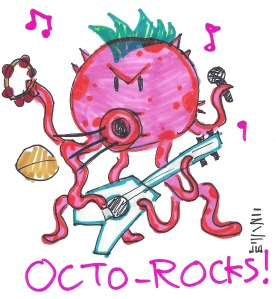 Based on a brain fart comment. It doesn’t make much more sense in context, I’m afraid…

Is the Wind Fish egg really a space egg atop a volcano? Wait, what? 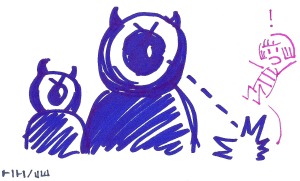 A Beamos trying to kill a little girl! (It’s Zoe from the Doodler’s webcomic).

That Cyclops miniboss shows up like twelve times. I don’t care enough to look up his name. (OK, fine, it’s a Hinox.) 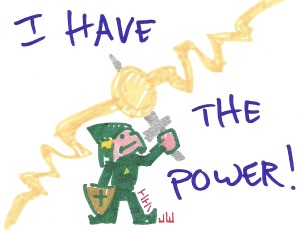