The Mystic and the Krazy Kat join the Player and the Doodler to succeed the King of Town as the next Ruler of the World, as well as get crazy hairstyles and kill each other!

Week 1: The King of Town has lost all of his, well, towns! Who is brave enough to defeat the accordion monsters and restore peace to the land?

Week 2: We all try to claw our way out of the Tutorial Zone of Doom! Also, several people get killed and drawn on and/or hair screwed up! Let the mockery commence!

Week 3: The game officially begins with a Balrog appearing in the Mines of Moriah! Doodler’s Bane! But you lowlifes can call him Johnny.

Week 4: The Mystic scares snowmen and kills Joy! And the Doodler finally becomes a man. Defeat the Rogue Vikings!

Week 5: It’s a land war in Asia! What fools we are! Also, the Mystic gets an axe through her head and we fight the Celebrity Lizardman!

Week 6: We liberate the Middle East! That was easy!

Week 7: Who loves cats more than the Krazy Kat? According to the Krazy Kat, no one. And now she’s a rocker with increasingly frantic commentary!

Week 8: It’s a paid holiday! That’s not a good thing, apparently. Also, the end of a manly era.

Week 9: Will anyone ever make it to Ural and finish this chapter? We’ve only been trying for THREE WEEKS!

Week 10: Progress! An old lady tries to save a royal dog, and the Player is a moron.

Mario Paint for the SNES, the game where we can both Play *and* Doodle!

Doodles (both from Mario Paint and the Edutainment Blitz as a whole):

The title card for our Edutainment Blitz!

The moral taught to us by edutainment games!

Our Mario Paint masterpiece, featuring cats and castles,. Looking at it for too long may break your brain.

L.E.A.P. Disks, the biggest Atari mystery of all! I don’t know where these came from, but boy, do we learn how to count sounds. And get admitted into college. And get lost in high school until we get eaten by a grue. 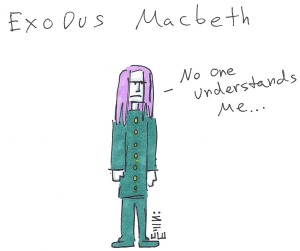 This guy came about due to a joke from High School Confidential. He’s the prototypical emo kid himself!

Return of The Incredible Machine, the physics puzzle game where you can drop bowling balls on cats!