Part 50: Our final stream begins with special guest star Potatedude aka Rockman joining us to see a robot fight his girlfriend and gay mother.

Part 51: We ignore the domestic abuse problem in the town of Choras in order to fix up a mansion so Frog can get some closure from his mentor buried under the rug.

Part 52: We finish up our massive medieval construction project and with it the last of the endgame sidequests. Time to take on the rotting pizza slice known as the Black Omen!

Part 53: Heading deeper into the Black Omen, we find goons. Hired Goons. Since most of this video is just fighting (and cool graphics), we pass the time discussing X-Men, Teenage Mutant Ninja Turtles, Donald Trump, New Game Plus, SomethingAwful, Secret of Mana, ice cream, and more! The Player is a harsh mistress.

You can mess with Texas if you want to. I’m not your dad.

Part 55: We finally reach the end of the Black Omen as Magus continues to suck, and Queen Zeal tires of us talking about Final Fantasy and tries to kill us. It’s LaVOSa, not LavoSA!

Part 57: The party uses Gaspar’s chamber pot to engage in The Final Battle! Followed by the Final Final Battle! And we speculate on the eternal debate: is Lavos truly evil, or simply a beast who’s just acting according to instinct?

Part 58: The Epilogue of Chrono Trigger! Or, as the Doodler would say: The EEEpilogue!

Part 59: Turns out we had a *lot* more to say about Chrono Trigger (and JRPGs), so we split it off into this bonus podcast/episode.

The game for the SNES where Charles Barkley plays some B-Ball with…his…college roommates or something. It’s turrible. Simply turrible. Featuring guest star Potatedude aka Rockman.

A good representation of Shut Up and Jam! featuring “Sir” Charles Barkley and a random collection of people. In this drawing, a potato, a white dude named Gunner, and Funky Kong!

King’s Quest VII: the game that results from the question, “What if Sierra got a glimpse into the future, saw all of our King’s Quest doodles, and decided to make a game from it? Also, terrible animation and voice acting?” Once again featuring The Sister.

Part 11: We return months later to find out how a Queen performs community service. Also we steal the pants off a bear.

Part 12: The game laps itself (again) as Valanice visits *sigh* Ooga-Booga Land. Also, we get run over by a horse and visit Etheria, which resembles the fever dream of Homer (the writer) and Lisa Frank.

Part 13: Everyone in the kingdom is waiting to die, so we decide to go to sleep. ACTION-PACKED! Then we’re attacked by a doodle! The fourth wall will not save us!

Part 14: The voice actors get so bored with this game that it sounds like one falls asleep in the middle of his lines. Then Valanice finds math, rips off King’s Quest II (maybe?), and stares at a well-endowed wind spirit for an uncomfortable amount of time.

Part 15: The “exciting” conclusion! Trolls are turned into princes! Lava is stopped by spiderwebs! “Frozen” is ripped off 20 years before it came out! And endgame cutscenes are repeated because Sierra!

Professor I.Q. for the Atari 800: the game that actually makes your I.Q. go down! Featuring The Sister, who needs a few honey ales to get through it. 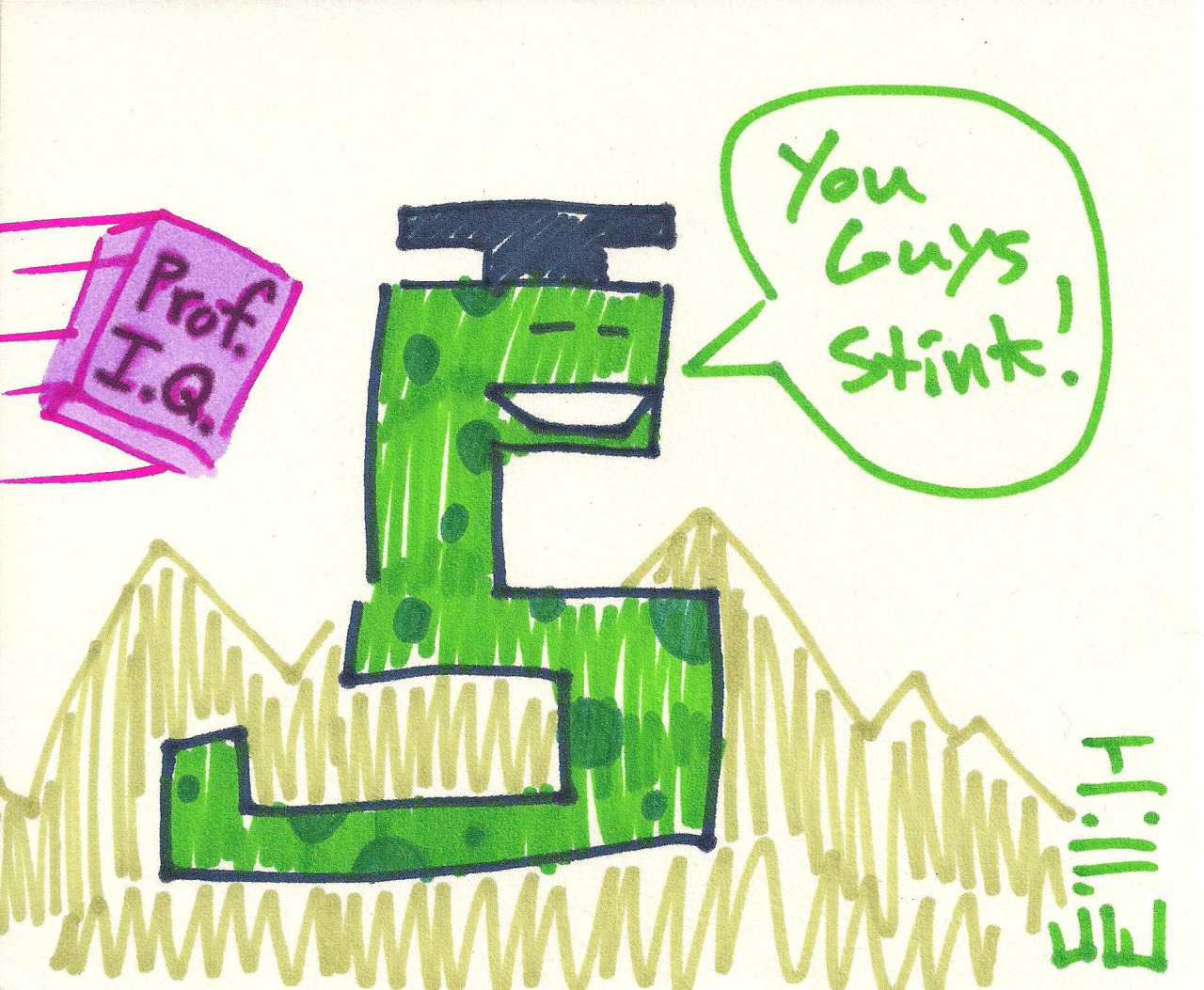 This is probably the only piece of fanart on the Internet from Professor I.Q., an obscure educational 8-bit Atari game from about 35 years ago. Enjoy your book headache, Professor Snake!