Samus and Link get all their powerups up in each other’s business! Can the Player and the Doodler sort through this sordid affair? Featuring Stalinade, Fidel Castro’s Havana Banana, Judge Wapner Cola, and some peanut butter soda! Drinking game HYYYYYYPE! 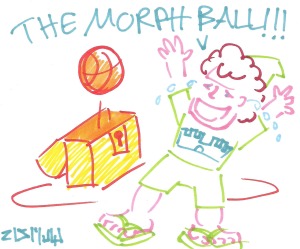 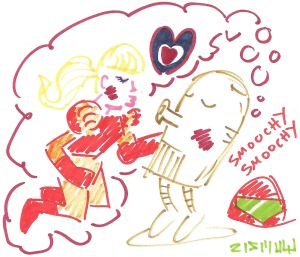 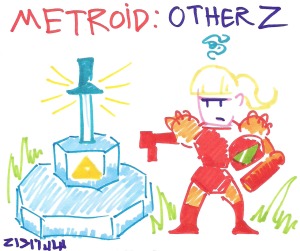 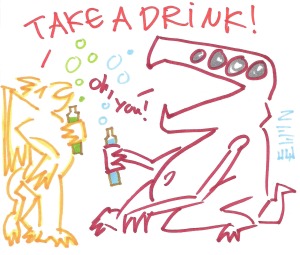 Week 101: Not gonna lie, this week is full of karmic retribution.

Week 102: “Ha ha I Won” wins! Well, in a way. However, in a more accurate way, the race is still on between her, the Player, the Krazy Kat, and CORNBUSTER***(music note)!

Week 103, featuring the funkiest Russian clown there ever was!

Week 105: The race for the finish! Will we be more successful than we were around 20 weeks ago?

Our final project, and also the most recent entry into the King’s Quest series, featuring the Greatest Graham-pa to ever live!

Part 1: Old King Graham may be losing his memory, but at least he dances like a leprechaun!

Part 3: Old Graham makes use of his senility to RESHAPE THE UNIVERSE and solve a few puzzles while he’s at it.

Part 4: Graham follows a series of romantic clues, which leads to him stuffing a frog up his butt. Also, more retcons from the old series!

Part 5: The game really tries to win us over with the promise of Square Castles! Will it be enough to overcome the severe depression the rest of this game causes?

Part 6: Graham finally bests Manny and becomes Dr. Brain’s assistant! And we get a clue as to who Gwendolyn’s TRUE grandmother is!

Also, King Graham dies. I, uh, may have a few issues with how this is handled.

Epilogue: Gwendolyn goes on a grand adventure of her own, hunting yarblesnoofs with sugarshrooms and meeting a Zelda boss or two! Now I want five chapters of THIS game!

Week 91: Guys, I think the Krazy Kat is turning into an actual crazy cat…

Also, the webcam gets frozen early on in this video. Don’t worry; we notice and fix it, uh, next week.

Week 92: The Player sneaks into heaven and kills the Krazy Kat’s god, causing a cacophonous apocalypse for everyone else!

Week 93: You’ll never get to heaven if you don’t know how! And the Krazy Kat learns to never bet against the house in Vegas.

Week 94: Everybody hates the Player. Except the Krazy Kat, who hates everyone (except her evil boyfriends). And is puppetry considered animation?

Week 96: As the Mystic finds herself fighting the Doodler’s comic strip characters, the Krazy Kat comes face to face with her own religious beliefs and dark sins…

Week 97: More of the Krazy Kat’s abusive relationships. Snnnnoke! And the “greatest” cliffhanger of all!

Week 98: No matter who ends up winning the game, the Mystic has already won in her heart. Beep boop, my lady.

Week 99: The Player is still stuck in purgatory, the Doodler is being persecuted by the Robo Mystic, and the Krazy Kat hatches a seeeecret plan…

Week 100: We enter triple digits in the week count! To celebrate, the Player goes gambling, the Mystic carries around a dead Danish bird, the Krazy Kat pursues her secret plan, and the Doodler experiences an entire Entmoot!

Part 60: More than two years later, we finally return to Chrono Trigger to explore New Game Plus and some extra stuff we didn’t cover the first time. But first, Crono and Marle have the worst first date ever.

Part 61: Featuring “The Dream Project” ending, we get to meet a bunch of programmers who seem really tired and maybe slightly homophobic?

Go back to page 7